Tim Burton’s Ed Wood is a great film, a zany comedic biopic about (arguably) the worst filmmaker that ever lived.

Johnny Depp stars as Edward D. Wood, Jr., a naive aspiring director whose latest stage production has gained a bad review in which only the costumes were given a modicum of praise. One day, he hears about a Z-grade production house making a thinly-veiled true story about a man that changed his sex. Wood comes back with his first “hit” screenplay – Glen or Glenda?, and directs himself in the starring role (Wood had a penchant for dressing in womens’ clothing).

This is much to the chagrin of his aspiring ingenue girlfriend Dolores Fuller (Sarah Jessica Parker), who’s about had it with Wood and his growing circle of misfits, perverts (including a low-key brilliant Bill Murray as transsexual-in-the-making Bunny Breckinridge) and freaks (his ensemble cast would soon include Vampira and Tor Johnson, the Swedish wrestler played here by Lisa Marie and George “The Animal” Steele, respectively).

Fate soon connects Wood with childhood icon-turned-morphine addict Bela Lugosi (a magnificent, Oscar-winning Martin Landau) and his career is set – the film covers much of the production of films such as Bride of the Atom (which became Bride of the Monster) and Plan 9 from Outer Space (funded by the Baptist Church as a fundraiser for their films about the 12 Apostles, it was originally went by a more “offensive title” of Graverobbers from Outer Space!).

Tim Burton’s film, stunningly photographed in stark black and white, is a throwback to the time of Z-grade horror and science-fiction films, and the results are magical. Depp gets deep into the skin of the superficial cineaste Wood, whose aspirations to be an auteur ironically hit a fever pitch when bad director met great director in an inspirational bar conversation with Orson Welles (an uncanny Vincent D’Onofrio). The acceptance Wood never found professionally was even made up for when he met a girl who loved him for him (Patricia Arquette).

This is perhaps one of the oddest, funniest and (in its way) weirdly inspiring films about show business ever made. It’s also one of the best. 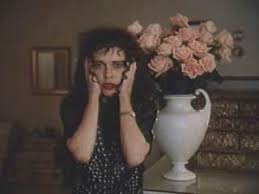 Michael Tolkin’s The New Age is a dry, savage, sardonically-witty satire – and something more. It’s also yet another emotional X-ray of the morally and spiritually bankrupt in search of a change. END_OF_DOCUMENT_TOKEN_TO_BE_REPLACED

A celebration of the written word both seen and heard.

…to the chagrin of true arbiters of taste

"all of life's riddles are answered in the movies"

The Wonderful World Of Films

All my aimless thoughts, ideas, and ramblings, all packed into one site!

Reviews on Film and Television

A new way of looking at your favorite movies

Movies, TV Shows and Whatnot